The Fall of Gilead

3 replies to this topic 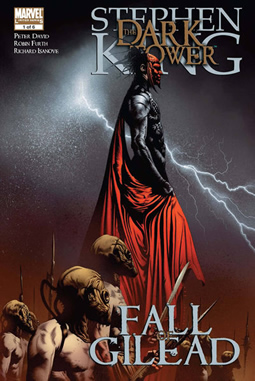 A horrified Steven Deschain learns that the deadly seeing sphere called Maerlyn’s Grapefruit has been stolen from his chambers! Far worse, when he enters his wife’s rooms to arrest her for the theft, his son Roland is standing over her body with a gun in his hand. The youngest gunslinger has perhaps committed the most hideous crime of all!

For the 4th arc of The Dark Tower, The Fall of Gilead, Jae Lee's artistic partner in the series from the beginning, Richard Isanove, is doing the art by himself. No reason for this has been given by Marvel at this time.

Also tagged with one or more of these keywords: Stephen King, The Dark Tower, Det Mörka Tornet